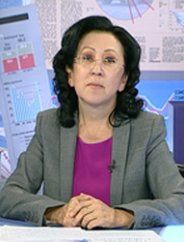 Independent director of the board of «Embamunaigas» JSC, Director of Expert Kazakhstan LLP

She began her career as a research officer at the Research Institute of Economics under the State Planning Committee of KazSSR. In 1992 she was appointed deputy director of the institute. Then she worked as the head of the department of financial and credit policy, first deputy minister of economy.

She also worked as the head of the Center for Economic Reforms under the Cabinet of Ministers and the Government of the Republic of Kazakhstan, First Vice-Minister of Finance, Vice President of Kazakhtelecom JSC, Deputy Head of the RK Presidential Executive Office, Deputy Minister of Defense, First Deputy Chairman of the Agency on Regulation of Natural Monopolies, Chairman of the Governing Council of Association of Taxpayers of Kazakhstan, Deputy Chairman of the Board of National Chamber of Entrepreneurs. At the moment she is the director of Expert Kazakhstan LLP.